It's an amazing thing. One day we're typing in each others' information and the next day, we're scanning their bar codes. Stay in touch... 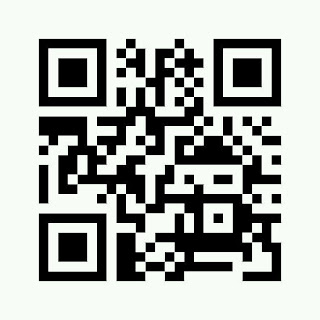 No comments:
Email ThisBlogThis!Share to TwitterShare to FacebookShare to Pinterest
Labels: Technology

Citizens of the United States (and for any other law creating / abiding nation) beware! Those who have been entrusted to uphold and enforce the law are perpetrators themselves...

Call me cautious, but I am a law abiding citizen. (I even recently had a discussion with my girlfriend who questioned my hesitation to make a u-turn.) Call me lucky, because the few times I have fractured a law or two, I have not been caught. Ok, so I've broken more laws than a few, so I guess I AM lucky. But then again, so are the numerous police officers that I have seen get away with breaking what they are supposed to be defending. BUSTED! I would love to make a citizens' arrest. Is that even possible? Does that even exist?

Part I
As I was walking down Broadway on Wednesday this week, I began to smell an uncanny odor wafting in my direction. To my surprise, there it was. 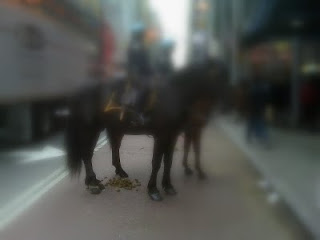 A large pile of manure! And where was it located? Why of course, beneath the steed of one of New York's finest.

Have you ever heard of curbing your dog? Shouldn't the same rules apply to horses? Or to any other animals that are allowed to walk the streets with other pedestrians? Why do those horses that draw the carriages around Central Park have a trough under their asses? They should be able to relieve themselves wherever they want, no? Are police horses exempt from the law or something? That would make them similar to Diplomats and other law "enforcement" I suppose, huh?

Part II
According to the National Safety Council, it is estimated that "more than 100 million people use cell phones while driving." In fact, 81% of the public admit to this. And of the now 6 states (see which ones) that completely ban the use of handheld cell phone use while driving, I happen to live and work in 2 of them. AND, on almost a regular basis, I have watched a police car drive by operated by an officer ON A CELL PHONE! I find it amazing that the same officer can be having a conversation on his/her cell phone while driving, and later on that day have the guts to pull someone over for the same misdeed.

Part III
Now this probably pisses me off the most. Have you ever approached a stoplight at an intersection behind a police vehicle? What's the first thing that crosses your mind? He can't pull you over because you're behind him, right? Actually, my first reaction is, "where are my handcuffs?" Why? Because you know that 1 in 10 (hey, I'm giving them the benefit) will flip the wild police lights on, run the red, and flip them off once they cross the intersection. You know what I'm talking about. Did that traffic camera get that on tape?


How do these law enforcers get away with it? Are these people not subject to the same penalties, if not worse? Would another officer pull over one of his brethren in the name of the law? Can standard citizens take action? Thought provoking isn't it?
No comments:
Email ThisBlogThis!Share to TwitterShare to FacebookShare to Pinterest
Labels: Crime, Police Officers, Rant, The Law
Newer Posts Older Posts Home
Subscribe to: Posts (Atom)