The truth of the matter is that people take scheduling events too lightly. A friend of mine put it perfectly. In considering how to schedule yourself, there are...

Fact or Fiction: The average amount of silence between conversations is 7 minutes.

I often enjoy a nice long drive with friend(s) to get away from the hustle and bustle of New York City. Don't get me wrong... I'm a true die-hard Jersey Yorker (n. one who lives in NJ and works/ parties in NYC --- I made that up... creative, right?) at heart. But sometimes it's just comforting to get away and catch up with great friends. Which leads me to believe....

7 minutes is a dreadfully long time between conversations. If the holes in a conversation are this extensive, you must be in very boring company or have completely nothing in common to discuss.

I challenge you to sit with a friend try to remain silent for 7 minutes... I've tried. Funny, right?

Recently, I made a trip to Philly. It's something I'm fairly notorious for. But instead of making the trip alone, I wrangled up a couple of friends and we made the short excursion together. Philly is only roughly a 2 hour ride away. Alone, this drive could seem like an infinite journey. But in good company, the arrival at the final destination happens in the blink of an eye.

As the driver of the vehicle, I could easily get away with not talking to anyone and claim deep concentration on the roads and the environment. So, I tried to remain silent. But as my nephew would say, "fat chance." One of my buddies initiated a conversation. The other countered with a response. And if you know me well enough, you know that I had to drop my two cents in. The question is... why? Easy. The topic was interesting. I had some knowledge about it. I had an opinion. For no more than a few seconds was there ever a silence... only enough to take a few breaths. This continued for the duration of the road trip. Jokes were told. Memories were recalled. And serious topics were even raised.

Conclusion: It's impossible for the average silence to last 7 minutes between conversations. Where do these statistics come from?!


Anyway... in the true Philadelphia spirit of brotherly love... I leave you with this...

No comments:
Email ThisBlogThis!Share to TwitterShare to FacebookShare to Pinterest
Labels: Fact or Fiction

3. flava - What makes a person different. Personality, style, a certain je ne sais quoi: whatever they've got that makes him/her unique from the next person.
ie. Sista's got real sweet flava.


So anyway, what's your flavor of literature? I'm the type of person (or maybe my type doesn't exist really) who likes to peruse non-fiction works related to, but not limited to, success / happiness / leadership / self improvement / anything insightful. There is a great abundance of helpful information out there. The hard part is to find it presented in a manner worth spending the time to read. Does the author appeal to your life? Is the style of writing colloquial? Are the examples relevant? 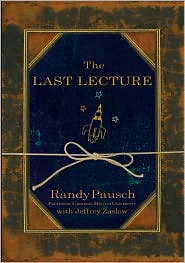 My latest pick up is a book titled The Last Lecture. It's a book about the "last lecture" of Professor Randy Pausch who was diagnosed with terminal cancer with only a few months left to live. But why did I choose to buy this book and read it? Quite easily, it was due to the introduction...

The less obvious part is how to teach my children what I would have taught them over the next twenty years. they are too young now to have those conversations. All parents want to teach their children right from wrong, what we think is important, and how to deal with the challenges life will bring. We also want them to know some stories from our own lives, often as a way to teach them how to lead theirs. My desire to do that led me to give the "last lecture" at Carnegie Mellon University.

These lectures are routinely videotaped. I knew what I was doing that day. Under the ruse of giving an academic lecture, I was trying to put myself in a bottle that would one day wash up on the beach for my children. If I were a painter, I would have painted for them. If I were a musician, I would have composed music for them. But I am a lecturer. So I lectured.

I lectured about the joy of life, about how much I appreciated life, even with so little of my own left. I talked about honesty, integrity, gratitude, and other things I hold dear. And I tried very hard not to be boring.

No comments:
Email ThisBlogThis!Share to TwitterShare to FacebookShare to Pinterest
Labels: Books 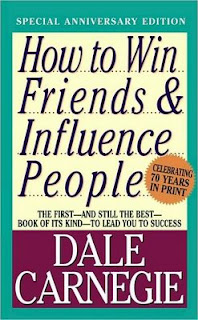 I'll be honest. I received this book as a Christmas gift this past December, and I've been hesitant to read it. The title alone seemed to be an insult to me. Do I seem to be the type of person who has no friends? Do I not know how to effectively influence people? What can I possibly learn from this book that I don't already know?

But to my surprise, this book is actually very well written. It provides great insights to the tragedies of social failure. I find myself agreeing with many of the citations. And I concur with the ideas and solutions to seemingly simple problems.

So far, this book reaffirms my ways of thinking, living, being. It is helping me keep a positive attitude about how I carry myself in the things I do and the words I speak. As I continue to read page after page, I find myself relating so many of the examples described within to my life in love, laughter, relationships, school, and work.

Many times I wish that people could understand why and how I feel the way I feel or think the way I think. And so I'm going to put this out there... READ IT! I highly recommend it (and I'm not even done yet). I'd go as far as to recommend that this book be required reading as a pre-requisite to college (yea, it's that good and that important). The references to notable people, quotable quotes, and most importantly, the appeal it has to the average person on a daily basis is what will keep you reading.

Trust me... you'll thank me for this. And I, in return, will thank you for reading it...
2 comments:
Email ThisBlogThis!Share to TwitterShare to FacebookShare to Pinterest
Labels: Books

Where life leads you...

For many people, the path of life leads to holy matrimony (or marriage, for the non-religious), and for years to come... anniversaries of that union...

In the coming months, it couldn't be any more evident amongst my friends and family. It seems that we're at that age when people all around us are "tying the knot," "getting hitched," exchanging vows, ... getting married. And for the people who have been in longstanding relationships, the talks of the event have, more likely than not, come up in conversation... more than once, I'm sure.

Yesterday, I attended my Aunt and Uncle's 40th Wedding Anniversary. This ruby-marked event is amazingly noteworthy. Long lasting relationships like these are what too many people envy these days. I'll admit it... I'm one of those people...

I'll leave it at that and leave you with this...

"Love is but the discovery of ourselves in others, and the delight in the recognition."
--Alexander Smith

... too much, and it's overpowering, annoying, distasteful...