I recently had a flashback of watching Jeopardy! with my grandfather when I was a kid. It's funny because this show is nearly as old as I am, as it first aired in September 1984. And Alex Trebek doesn't look like he's aged very much. His hair may have grayed, but the voice, style, and demeanor is consistent. During my (f)unemployment, watching this program is one of the things I look forward to any day that I can. 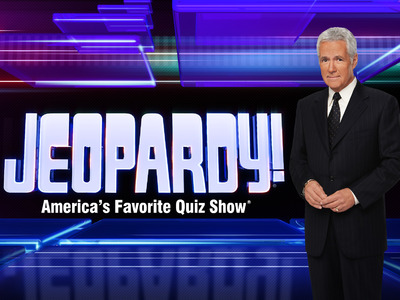 Anyway, like my grandfather, I am hooked on this show. It's challenging, it's fast-paced, the clues are sometimes witty, and the knowledge-base required to succeed is that of a Renaissance-man, in that you need to be well-rounded in all subjects.

My grandfather was a really intelligent man. He seemed to be able to provide the proper questions to so many of the answers (see Gameplay) in a variety of topics. I always wanted to be like him. I wanted to be quick, knowledgeable, and well-rounded. I really looked up to him as he helped raise me and take care of me (along with my grandma and parents, of course) until he was eventually unable. This is probably why I always think of him every time I watch Jeopardy! on tv, which is still aired at the same time it has been for the past 33 years, at 7PM Monday through Friday.

I'm going to try to be a contestant. I have a feeling that my grandfather would be excited for me if I actually made it. It's been a bucket-list item too. I guess there's no better time than now, during FUNemployment.

Do you play along while watching? Want to extend the game? Play the extra 6th clue with J!6 on Amazon Echo!
Email ThisBlogThis!Share to TwitterShare to FacebookShare to Pinterest
Labels: Amazon, Amazon Echo, Family, FUNemployment, J!6, Jeopardy, TV, Unemployment