Two nights ago we joined a star gazing tour. The driver took us out to the middle of the desert. He followed a half-paved / half-gravel and dirt road away from the town of San Pedro de Atacama. At some point, he literally turned off of the road and shut off his lights. He was driving by moonlight! It was awesome. There was no ambient light from any unnatural light source. And the moon was only slightly more than half bright.

Our experience that night was a perfect segue to yesterday's adventure through the Valle de la Luna, or Moon Valley. We were able to see the large quantities of salt present in the desert. The mystery of various formations from long ago continue to puzzle us all until today; we saw the remnants of one particular formation, Las Tres Marias. And something that Carolyn and I have an affinity for doing is capturing sunsets. Everywhere in the world we've been, a sunset seems to have captured our attention.

Las Tres Marias is an ancient formation that lines up with the asterism in the Constellation Orion, specifically Orion's Belt. It is said that on the winter solstice (in the Southern Hemisphere - June 21), these 3 formations fall directly in line with Orion's Belt. In recent history, a tourist tried to climb the leftmost Maria and toppled it. He was banned from the country for 3 years and paid a nominal monetary penalty. That's just ridiculous. He should have been banned from the country forever and forbidden to visit any sights of historical significance. Now there is a perimeter established around this sight and others in the reserve to prevent further similar damage.


Walking around Valle de la Luna gave us plenty of time to think and observe. Trekking up and down the sand dunes, through the various caverns, traversing salt and rock formations gave us so much perspective.

Do we have the fortitude to withstand the test of time like the elements in the desert? Are our dreams as colorful as the sunset? Will we travel the earth like the wind-blow sand? Or will our passions dry-out in the desert heat? 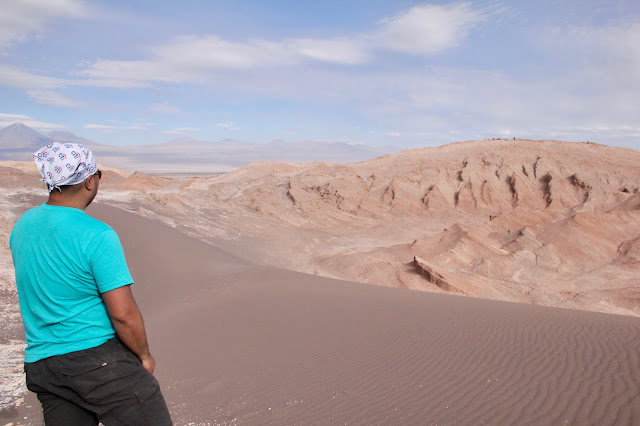