It's been over 20 days since I last updated. And our time has been spent sort of adjusting, and sort of fending for ourselves. As I sit draft up this post we are sitting in a the peace, quiet, and serenity of Mrauk-U, Myanmar (pronounced /mrauw-oo/), which is quite the opposite of the chaotic, loud, impatient, and disturbing country of India.

Again, due to the time elapsed since my last post, this will be a batch read. In other words, I'm compiling all my thoughts only chronological to the extent that I thought them and possibly in connection with our travel days (New Delhi > Vrindavan > Mathura > Agra > Jaipur > Goa > Mumbai).

India is a true 3rd world country. I've never been anywhere quite like this. And I think that the state of this country is so unfortunate, and my experience is so eye-opening. 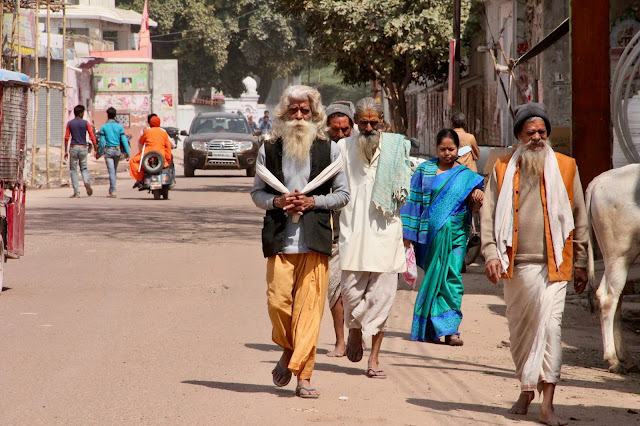 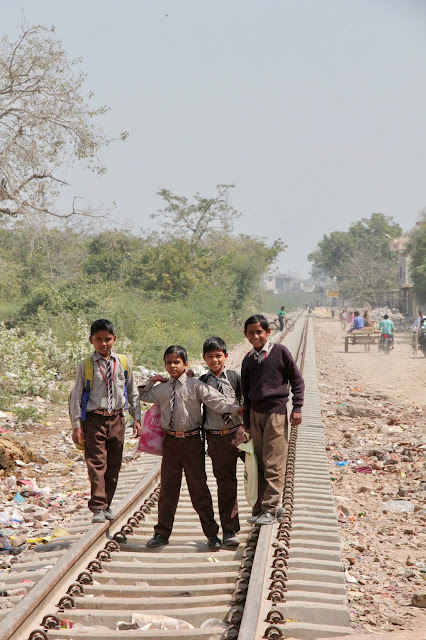 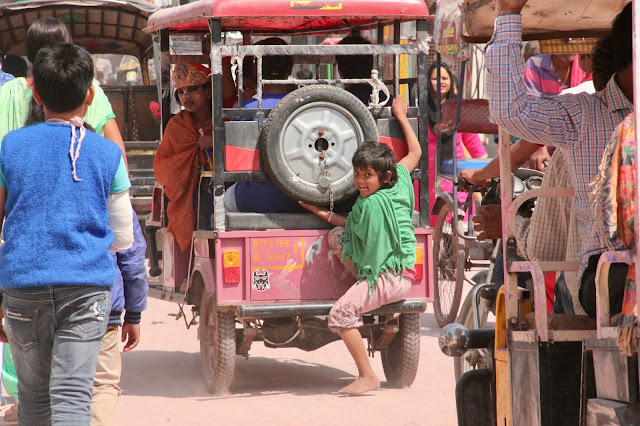 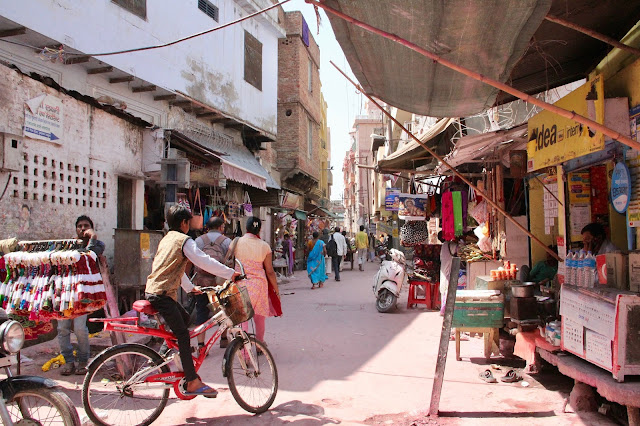 Known as the birth area of the god Krishna (born in Mathura, spent his childhood in Vrindavan), these towns are kind of like pilgrimage areas for devout Hindus.  We are spending our Holi festival here, and it's chaos. People are everywhere and so are all the colors of the rainbow. The streets are jammed with people. We spent some time on a rooftop to avoid the colorful tornado below. But it's inevitable. You have to walk through the craziness and you get doused in color. After 3 minutes in the streets, you look like a Skittles bag was melted over your head. And it's not like people just throw the colored powder, they also wipe it on your face. So you have like a million peoples' handprints all over your body. 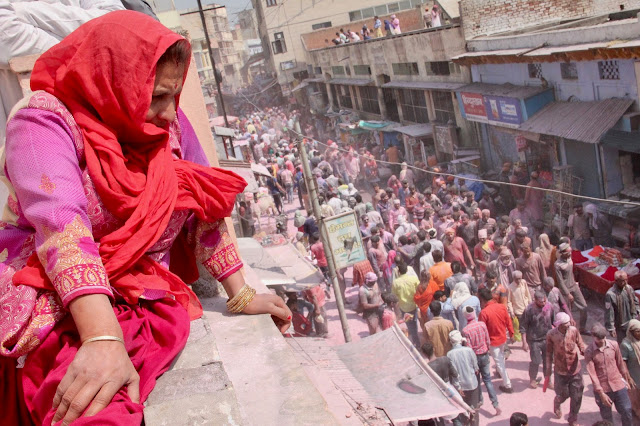 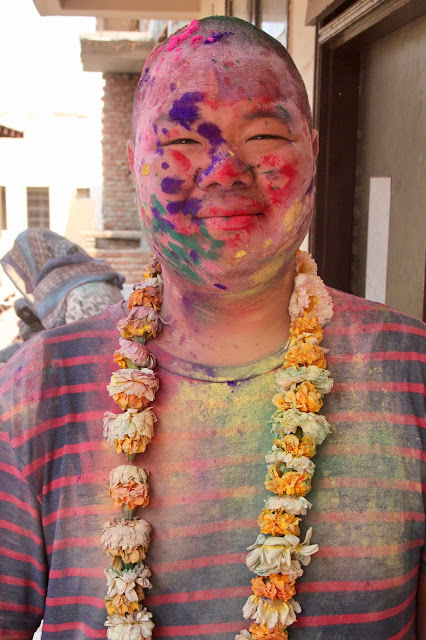 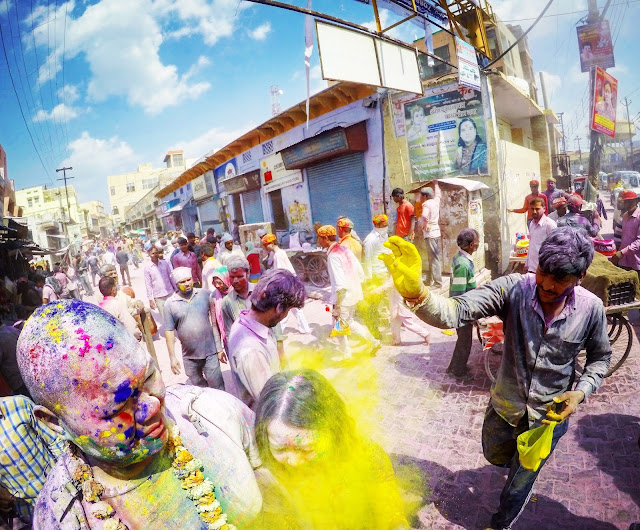 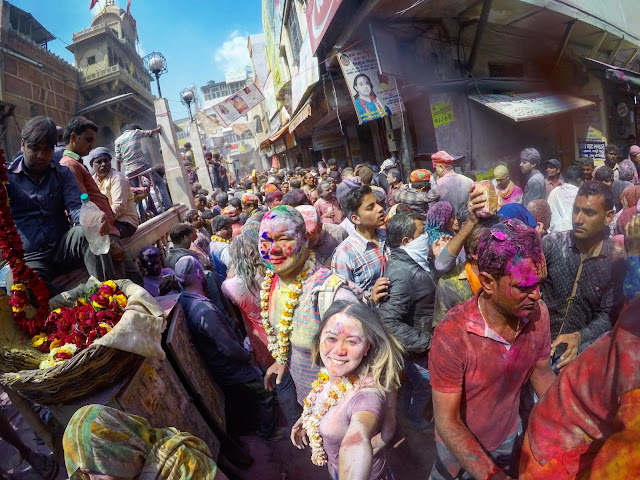 One of the most disgusting things we did in our lives happened in Mathura.

As a practice, Hindus do not wear footwear into the temples. This is not uncommon in other religions, like Buddhism, or even common practice in an Asian household.

On one morning, we met an Indian couple headed out early in the morning, same as us. We ended up sharing a tuk tuk to the temples, and they offered to let us tag along and they would help us with the language barrier and give us some insights. Wonderful! They were a great couple who really went out of their way to assist us. So we took them up.

We hired a tuk tuk for the day at a fixed price. He would drive us everywhere and wait for us to visit each site. At the very beginning of our tour, the wife advised us to remove our shoes and just walk around barefoot. Granted, many other people were barefoot, so it made some sense. BUT, if you saw the streets in Mathura, I'm pretty sure any first world person would vomit at the idea.

Aaaaaand we DID it!

Agra is most well known for the Taj Mahal and the different forts and other such architecture of different time periods. The Taj Mahal is certainly grand and a lovely gesture of a King to his wife. But in my opinion, the hype is overrated. The structure is beautiful. But the waiting, the lines, the security and all the hassle associated with the Taj is nonsense. When you actually get to view the mausoleum, it's not really that impressive inside. And the guards just hurry you around the tomb and out the door again.

I'd say it's worth seeing the Taj Mahal from the outside and from afar, but I wouldn't say it's necessary to get within the walls and gates. Sure, there's a reflection pool, but you can get photos just as beautiful from the garden on the back side across the river.

I don't regret going at 5AM, but you don't really get to a see a sunrise because the gates don't open until after the sun actually rises. So that's not worth it. Just go in the middle of the morning when there's no line to get in. 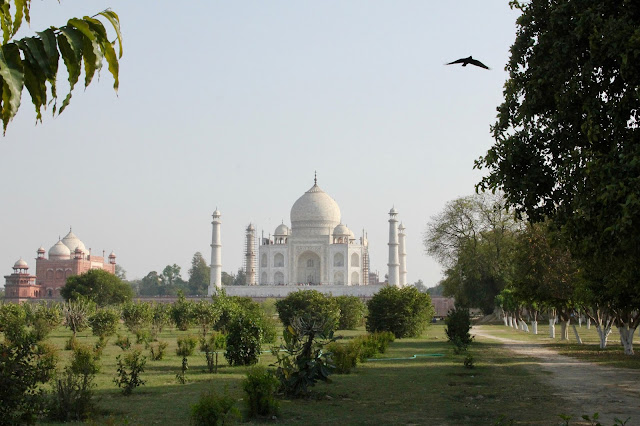 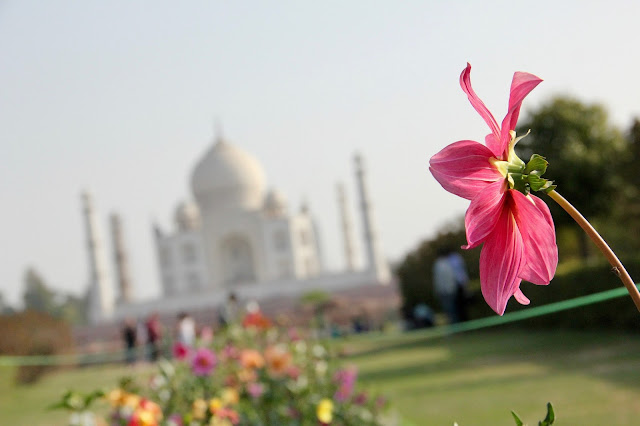 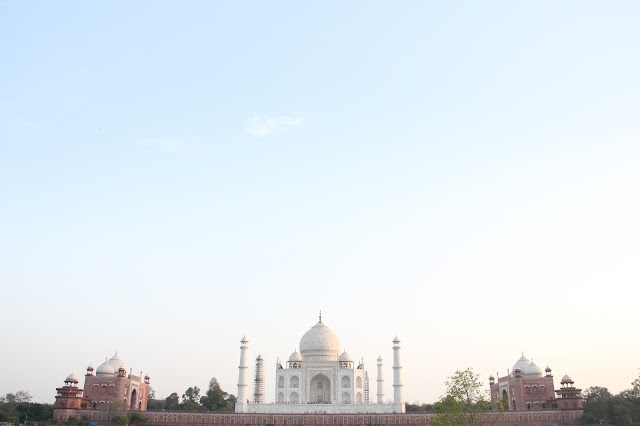 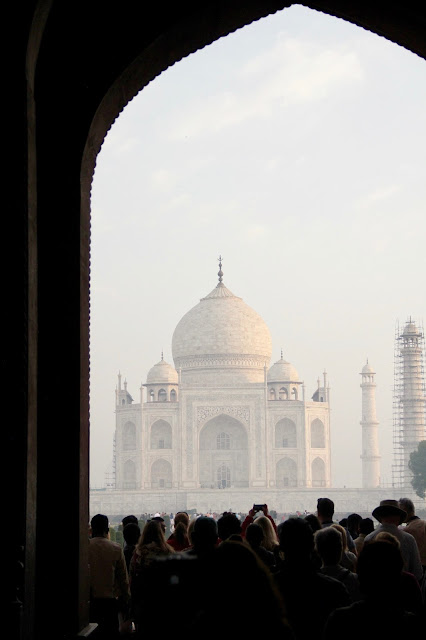 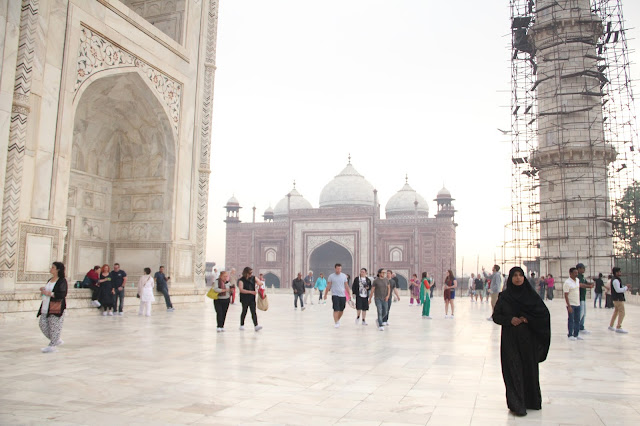 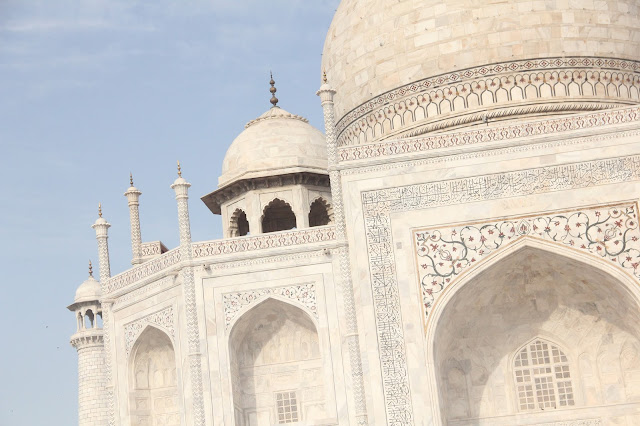 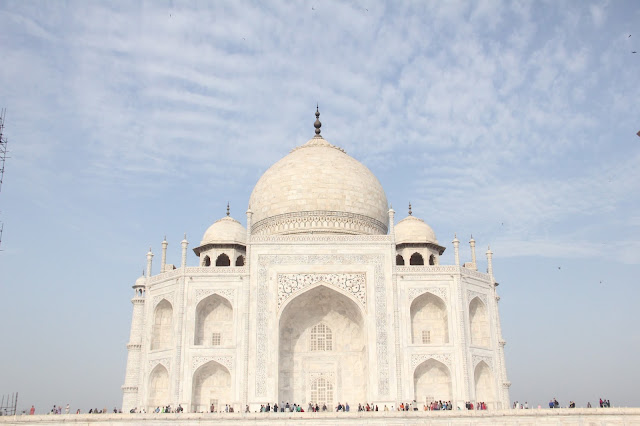 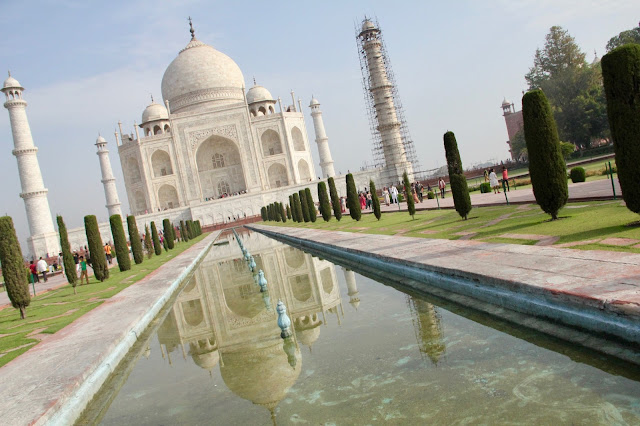 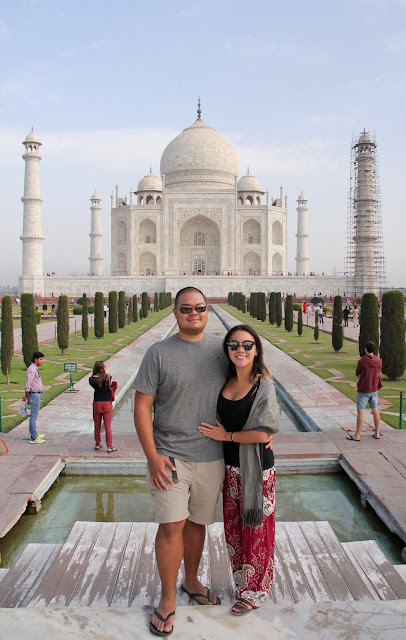 Like everything else in this country, security at the train station is fake. They have bag scan machines and metal detectors, but they are unmanned and no one checks anything. We literally walked thru the gate without taking off our packs or scanning anything. Pretty ridiculous. Also, people just cross the tracks randomly between platforms without care for trains entering the station. If a train rolls in, the people just stand in between the tracks and allow the trains to cross behind and in front of them.

I admire solo women travelers. They have so much courage and adventure in them. It takes so much to travel around the world by yourself. You have no one to support you along the way. You have no help from a trusted friend. You have no shoulder to cry on when you struggle the most. I could never travel by myself, which is why I am so happy to have my beautiful wife accompany me to the most remote parts of the earth.
----------------------------------------
Jaipur, India

Jaipur is such a different city than the other North Indian cities we've visited so far. It's almost like we've traveled through time as we've passed through the cities. Each city we've navigated through has progressively gotten better. In a clockwise manner, from Vrindavan to Mathura to Agra, and now to Jaipur the situation has improved drastically. We could very well have been in the early 1900s in Vrindavan and worked our way to the present in New Delhi.

Jaipur, the Pink City, is so much more relaxed. The Hawa Mahal is the most interestingly designed building in the city. It makes you think that there were so many women hiding behind all the windows looking down on the city. It was fun to walk around and peer through each window and catch a glimpse of every woman's view of the street below her.

The trains are unbelievably long and seem to only be pushed/pulled by a single engine. How can that be efficient?

The roads are fairly decent. But the drivers of the buses are a bit erratic and unsafe. There's plenty of speeding, abrupt braking, and enough  swerving to compete with an amusement park ride.

We were never able to get off the waitlist for our Jaipur to Delhi train so we ended up canceling and riding the bus. The bus was quite easy to get a ticket for and ride. Surprisingly it was better than the train in our opinion. And in between Jaipur and Delhi are much more life and establishment. The closer you got to Delhi the more buildings and life you could witness popping up. And just outside of Delhi city are all the businesses possibly setting up their real CBD, we don't know.
----------------------------------------
New Delhi, India

I'm so unimpressed with Delhi for so many reasons. It's overcrowded. There are so many liars, cheaters, thieves, and con artists. The city is unbelievably dirty for a capital city. It's too big geographically and makes getting from one place to another more challenging especially due to traffic. The roundabouts are also mostly useless when there is a traffic cop trying to screw up the traffic pattern thinking he has a real job there. The police are as corrupt as the thieves on the street. They know of all the touts and scams but they would rather get paid off to look the other way. You don't know what kind of officer you are getting in the streets of Delhi.
----------------------------------------
Goa & Mumbai, India

Goa is a diverse coastal region on India's west coast on the Arabian Sea. Although the sea is not so great for swimming, the location is fantastic for seafood and climate.

I would know more about Goa except for the fact that I was practically bed-ridden from a terrible bout with LBM for 2 of the 3 days we spent in this warm-weather region. But on the day we did venture out, we experienced the simple beauty of the small shops in the walkable neighborhoods in North Goa. We strolled along the streets of Anjuna and Candolim and meandered towards the beach and shoreline for quick glimpses of the swimmers at sea. The feeling of peace comes with the waves lapping at the sand and a calmness engulfs the area.

It should be noted that we really treated ourselves with a stay at the Grand Hyatt Goa and couldn't have been more impressed with their service and quality. It was the most comfortable we've been (despite my time spent on the throne) during this whole trip. I couldn't have been happier to be sick in a place like this.

Mumbai should be the capital of India. It has rules, and they are abided. It has structure, and it works to maintain the peace and civilize the people. The city has character and history, which give the city a sense of pride. Mumbai has shopping, siteseeing, transportation, and color that give people a reason to visit.

We did a half day city tour to see the livelihood of the people. We experienced the different neighborhoods from the wealthy to the not so wealthy in finance. Cars from all classes perused the streets. People from all walks cruised the walkways and road-sides. And people paid us no attention, which was fantastic. The art deco of Mumbai was reminiscent of Miami, FL. The lively streets in the evenings reminded me of the Lower East Side in Manhattan. The cricket grounds were like the Meadowlands in NJ.

It was interesting to see the largest washing laundry areas in Asia. All of those families had a job and were doing it to the best of their ability. It's a dirty job in some cases, but they were for the cause. And the effect was that although they were not rich by any standards, they still had things to show for (ie. satellite tv, cell phones). Despite not having cars or houses to prove their success, these people are content with what they have in the conditions that they have them in. It's somewhat admirable. 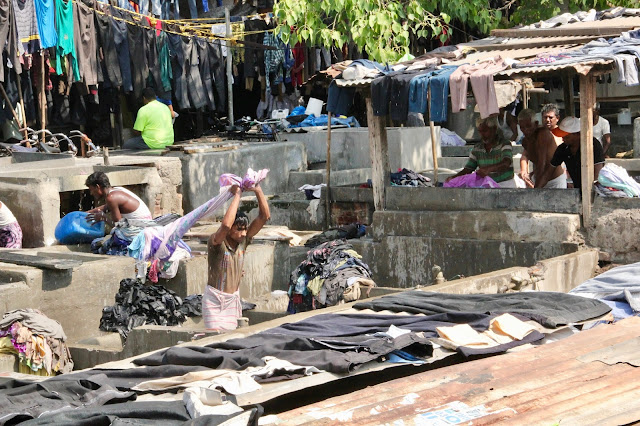 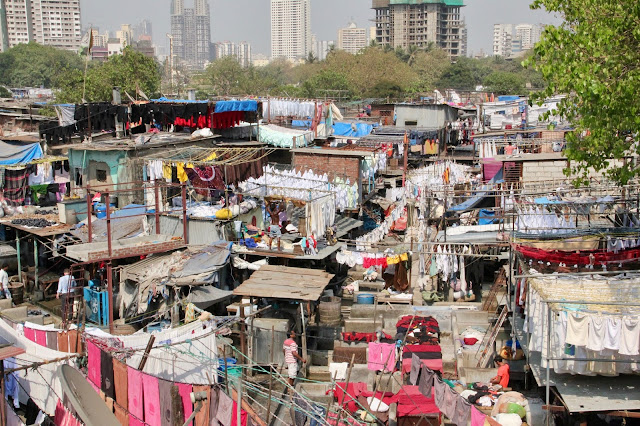 I think what I was most impressed about in Mumbai was the dabbawalas. These delivery men are some of the most admired in the city. It is their job and duty to deliver meals prepared and bagged by the husbands and wives of the working class to their spouses in the office. It is often said that the dabbawalas make no mistakes in their deliveries of the 100s of 1000s of lunchboxes daily. They even return the lunchboxes to their origin after lunch. And everything is done manually. Meaning, they ride bicycles, trains, rickshaws, or pushcarts to get it all done. Nothing of their process is motorized. It's an amazing system. If only all delivery people were as prideful, accurate, efficient, and courteous in their work. 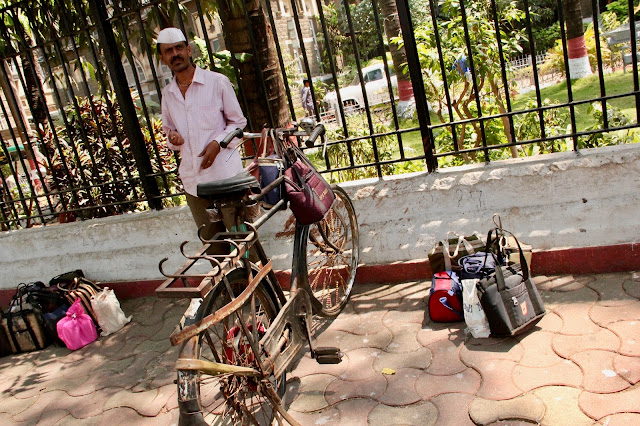 We did a half day slum tour, and actually it was impressive. I was impressed by the ability to live in such conditions. I was impressed by the fact that so many people had jobs yet the literacy rate is so low. I was impressed with how large the area was and how many people lived in this community. I was impressed with our tour guide who was 18 years old who grew up in this neighborhood who got out through education and was studying engineering in University currently. With him, we had the ability to walk deep into the slums. We went into the tiniest spaces where people lived, cooked, brushed their teeth. We saw the communal latrines. We learned where people worked and what kind of jobs they held. We learned a good amount in the 4 hours we spent in the slums. And thankfully, the only thing we got were some looks and never encountered any problems. It's said that the residents are peaceful and do not look for any kind of trouble.