Support For The Cuban People, Support for All People

In July of 2019, we traveled to Cuba. During that year, numerous restrictions to travel were implemented for US citizens by the Administration. But we still found a way to get there.

With a couple of close friends, we were travelers under the “Support for the Cuban People” category of limited visitors to the island nation. We checked in at IAH and paid $150 for our “visa” and proceeded to fly first class (upgraded due to status) to Havana.

After a short flight in fantastic tropical weather, we landed at Jose Marti International Airport in Havana. After a ridiculously long wait at baggage claim, we found a collectivo or shared taxi for the 4 of us and saved Havana to be our last stop instead of our first. Typical of our style of travel, we were bound for the smaller cities and towns off the beaten path. This time, we'd call Cienfuegos and Trinidad our homes for most of this adventure.

Our 10 days on this island nation were like stepping back in time. We enjoyed the reprieve from the hustle and bustle of 21st century American life. Being disconnected from the internet, using tangible currency to complete transactions, negotiating for better prices for services provided by locals, speaking a foreign language to get by, and navigating the old roads in classic cars were a joy to be had throughout the trip.

Along the way, we met so many great people, but at the same time, we did feel some prying eyes. In the smaller towns this tends to happen. It's not a surprise. But there was never any real animosity felt. It was just the feeling of eyeballs following you in motion.

One of the best connections we made was with our Airbnb / Casa Particular hosts - in Cienfuegos, Magda and her husband, and in Trinidad, Daineris and her son, Fabian.

Although Magda or her husband spoke no English, I used my 6 years of Spanish to get us through (with a little help of Google Translate). And despite Daineris being able to speak fluent English, she challenged me daily to speak Spanish! What a great experience to be immersed in language. Both hosts gave us insights to their locales, from where to eat, where to shop, where to swim, and even where to dance! They helped us organize collectivos to travel between destinations, provided us with ample desayunos or breakfast to start out our days, and in Daineris' case,  corrected my Spanish when it wasn't perfect. 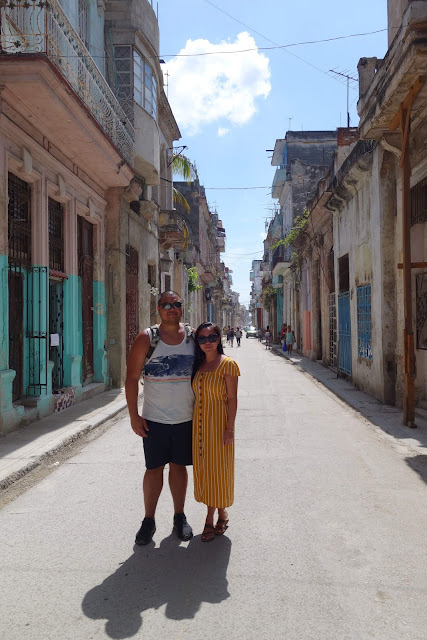 This is not to say that we didn't encounter other equally wonderful people. We just didn't spend as much time with them. I have to say that all of our collectivo drivers were so engaging. They were all curious about us, foreigners. On our short rides, they inquired about why were in their country, what did we like to eat, how did we learn to speak Spanish. On the longer rides between towns and cities, in very basic Spanish, we talked about our childhood, our families, the weather, other tourists. I asked about fruits and vegetables well-known in Cuba. They asked if we had ever heard of certain things. I asked how to say certain words by providing descriptions of what I imagined. It was like playing Pictionary verbally! Our conversations were endless.

One of the little things that I really enjoyed was the old school way of communication. Because of the lack of very good internet, people still make house-calls. It's not uncommon to see a man calling from the street up to the 2nd floor balcony until his friend or family member or love interest comes to answer. I also really enjoyed sampling from street carts of food selling anything from fruits and vegetables to pan con jamon to tostones o maduros to churros to chicharrones.

On a different note, I think one of the harder things to grasp was the actual poverty that we sometimes witnessed, but more so learned about. To some extent it's not outwardly visible because the people are usually so positive or laid back or energetic. Like other communist countries in the 3rd world, Cuba rations food. We'd been to other Communist countries but never saw this life first-hand. Our Airbnb hosts shared their rationing booklets with us. They educated us about how much of each staple food they were entitled to. They shared their opinions about their lifestyles.

The strangest part about the whole setup is that having an Airbnb is very much a capitalist idea. Anywhere else in the world, individual owners are the beneficiaries of renting out their extra space to make more money. In Cuba, however, the casa particular owners are undercut by the government; they must pay the government to setup their hosting situation. Maybe it's like a tax, but I don't think it is. I suppose the hosts still make some money and are a little bit better off, but my feeling was that they were still suffering in not reaping the full benefit of being an owner like everyone else in the world.


Despite this, the Cuban people remain so positive. They are so hospitable, looking to help in any way possible. Each person we met was so open and happy to see us, and we were happy to support them.

Most people say that the beaches are the most beautiful part of the island. But I think that the island wouldn't be as beautiful if not for the quality of people that inhabit it. It made the experience that much more wonderful.

Be unassuming when traveling to Cuba, you will appreciate what the country has to offer. I suppose this is the advice I’d give for travel to any country, city, or village but In our recent travels no places has made me think this more than Cuba (and now Saudi Arabia too).

What we know about Cuba through the media is simply the negative. No surprise. When politics dominate the news, and the country opposes another’s actions, you will never see or hear about the beauty of the place or the people. You lose out on the creativity of culture, the splendor of scenery, and the camaraderie of humanity.

Before we left for Cuba the restrictions on travel to the island nation became increasingly difficult to overcome due to the current political administration. But what for really? Because some people want to impose their will on another people not seeing eye to eye with you? I get it, but I don’t. Trying to keep our nation safe at the peril of others through modern day non-violent warfare / bullying is not brave nor honorable.