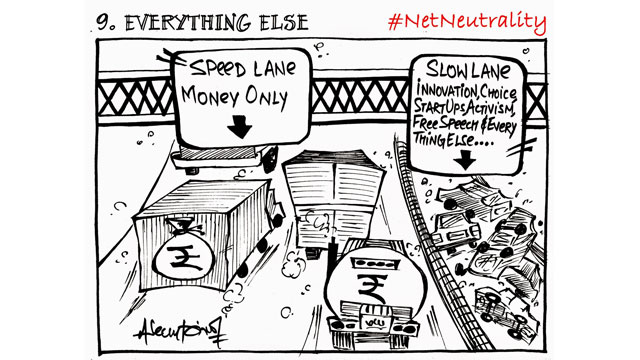 "Net neutrality is the principle that Internet service providers must treat all data on the Internet the same, and not discriminate or charge differently by user, content, website, platform, application, type of attached equipment, or method of communication. For instance, under these principles, internet service providers are unable to intentionally block, slow down or charge money for specific websites and online content." - Wikipedia

Under the new rules, ISPs:


ISPs will also be permitted to throttle up or down services, content, and apps for financial consideration.

Soon we'll be hearing from various service providers about premiums we're going to have to pay to view particular websites or get higher speed internet or prevent these companies from throttling. We'll be seeing tiered service plans. It will be like the caste system of the internet.

I have no belief in the idea that this repeal will spur competition or expand / upgrade networks and access. I also can't see how major telecom / communication / broadband providers would not make sweeping change in favor of making more money. Capitalism and price gouging are the centerpiece of this major move.

An equally large issue is the idea that this repeal will impede free speech, or at least potentially impact it. If service providers have control using pricing mechanisms on particular websites and ability to access, then isn't this a violation of the 1st Amendment? What would stop a company from blocking an opinion website that is in stark contrast to their viewpoints? What would prevent an internet service provider with a historically political bias from charging more to view sites where politically charged movements begin on the internet?

Similar to tax reform, only the wealthy will benefit. The rich keep getting richer, while the middle and lower classes suffer the most.
Email ThisBlogThis!Share to TwitterShare to FacebookShare to Pinterest
Labels: 1st World Problems, Internet, Net Neutrality, Opinion