Did you miss reading my blog? We're still alive and well!


Wow! It's been nearly 2 weeks since my last post! So many things to catch up on. Where do I begin?

Four of the eight days we spend in Indonesia were spend on these tiny little islands part of Lombok. It's about an hour and a half choppy fast ferry ride east of the island of Bali. But of course first, we needed to get to the port which is around an hour and a half from Ubud. For all that traveling, we rewarded ourselves with more relaxation (as if 4 days in Ubud wasn't enough).


Two days on Gili Trawangan (aka Gili T) allowed us a glimpse of a laid back daytime and a socially active nightlife. The most popular of the 3 islands (T, Meno, Air), Gili T is the jumpoff for many activities. It was here that we embarked on a half-day glass bottom boat ride to go snorkeling. Carolyn worked her magic negotiating, and we made 2 new friends along the way who joined us for the tour. All together, we paid 700,000 IDR ($52USD) making it $26USD for each couple. Good job babe! It was on this trip that we got to swim with turtles, see more coral life, and other colorful fish.


Side note: I was really surprised at how much coral had been dying / died and washed up on shore. It's a bit sad to see and painful to step on. Climate change is real.

A 7-minute fast boat ride to Gili Meno took us to our 2nd of the 3 islands, and this is where we took the remainder of the 2 days. Knowing what laid ahead of us after leaving Indonesia, we took this time to really relax without any activity. Aside from the brief swim in crystal clear blue waters, the extent of our movement was walking 30 seconds to the beach and ordering fruit drinks. 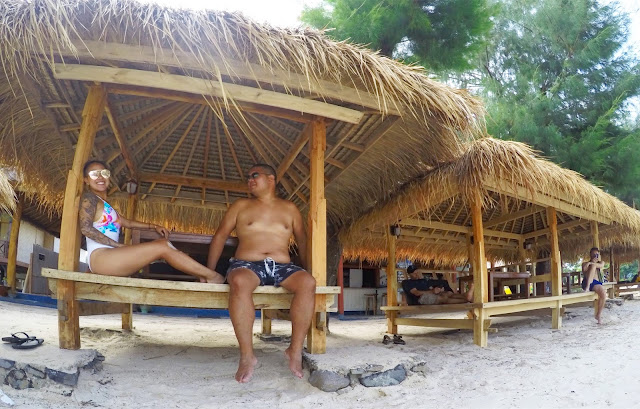 It’s only a 2-hour flight from Denpasar, Bali, Indonesia to Singapore, which is a major transportation hub in Asia. Changi International Airport has consistently been rated the best airport in the world year after year. It is enormous. There are heaps of shops; it’s impeccably clean; it’s super safe and efficient. And the city of Singapore itself is no different than it’s representative airport.

It’s here that we met a few of our friends who are also traveling the world or working around the globe. And that’s how time escaped us.


When we’re traveling with people we know so well, it’s easy to eat really well also. And Singapore makes that extremely simple. Although the city is known to be the most expensive in the world, food can be very inexpensive. And that’s important to backpackers like us.

In search of wonderful food, we also passed by many sites by walking through all the neighborhoods. Chinatown. Little India. The Arab quarters. And all the rest of the streets in Singapore. The city is small, so it’s easily walkable.

We ate at 4 or 5 different markets (ie. Chinatown Complex, Maxwell Road, Old Airport Road) and in as many as 20+ hawker food stalls that were pocket change cheap. We once treated ourselves to an expensive fine-dining meal, and it was well worth it. And tried many things in between. Together with friends we roamed the nightlife neighborhoods, chatted for hours in speakeasy bars, or shared meals at plastic tables and stools. And we saw the sites in between every meal, snack, or drinking affair.

Singapore was fun for so many reasons. We had good company. The food was fantastic. And the city was inviting. Maybe we should have our long-haul layovers in Singapore from now on…

A short bus ride away from Singapore, Malacca feels like a sleepy town. But I think the people are just hiding from the daytime heat. At night, the town comes alive (even on a Sunday) for the Jonker Walk Night Market. It’s here where you can find almost everyone from town, be it tourist or local. Plenty of goods / services / and edibles are sold from clothing to trinkets and knick-knacks to massages and local food.

The town itself is known for the historical landmarks and cultural museums all around the city. A rich history from a mix of Dutch, British, Portuguese, Indian and Chinese gives the character of the city’s people. English is well-spoken all around. People look like they’ve come from half-way around the world, when they’re really locals. You can’t tell tourist from Malacca-raised. There are a handful of places of worship within stone’s throw of each other which further supports the diversity in the community.