We made the trip to Kampot, Cambodia and this is what we learned. 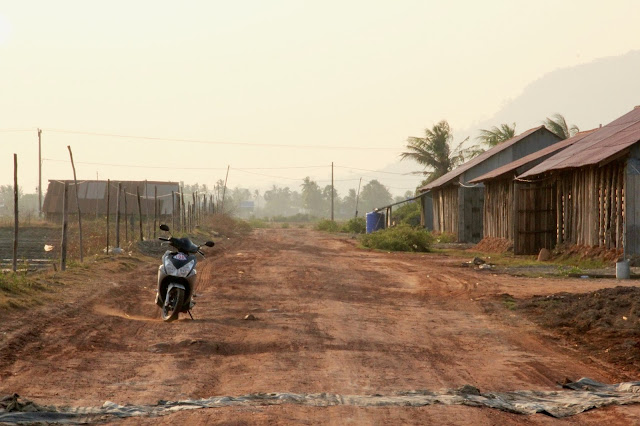 As poor as people are here they still can find some kind of work. We didn't see any homeless people. Everyone had some kind of job, whether selling fruits or cheap snacks on the side of the road or driving a tuk-tuk. For example, our tuk-tuk driver worked hard for his money. We negotiated for a sunrise viewing in Angkor Wat and rides to 4 temples. That's about 9 hours of work, not to mention waking up well before dawn. And we were able to pay only $16 USD. Our haggling started at $20, that was his price. We countered with $15 and didn't budge. The driver went from $18 to $17 and we finally settled on his final offer of $16. Even for a single greenback negotiations persisted. The people are poor but honest and hard-working. 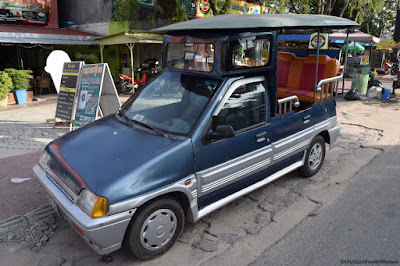 Sihanoukville (the little town we flew into today) is a lot poorer than I expected. I see shacks and tin roofs and garbage. But amongst it all are casinos and hotels and construction of all sorts. There is a huge disparity in income here. I even see a Lexus and Audi around next to modified cars used as tuk tuks.

Carolyn and I decided to skip Sihanoukville as it sounded like a party / beach town.


Stranger Danger?
Yesterday's thoughts and notes from during the day.

When you're traveling sometimes you have to go against the very first rule we were taught as children when venturing out into the world. Back home we know it best as "stranger danger." If not for the educational purposes of learning from others on the road or finding out how to get from point A to B, then that rule might remain unbroken. But travel life has taught me that strangers can and will be helpful in every aspect of globetrotting.

We just got in a car with someone who we completely do not know. We don't even know if we're supposed to trust this man. Our shuttle bus driver helped us find him in a parking lot across from an open air market. We are looking to get ourselves from Sihanoukville to Kampot, Cambodia. If you map it out, that's a 1.5 hour journey but the reality is closer to 2hrs. And this late in the afternoon there are very limited legitimate mini buses from town to town, the option we were hoping for. There are also no more flights coming in (we were probably the last) so that makes it even harder to find sharing situations. But we found this guy. He is not a taxi. There are no markings on his 2000s Toyota Camry (at least the car could be reliable). And he's not wearing a uniform. He seems to be an ordinary guy trying to make an extra dollar. Who after some hard bargaining was willing to take us for $20 (normally $30-40). He was able to get someone to share the ride so here we are in a car going to Kampot with a driver we don't know and another passenger who is a complete stranger.

My eyes are peeled the entire time. If I could have removed one and attached it to the back of my head, I would. However, the middle aged man and the guy who seems to possibly know this driver seem to be fairly decent people.

Sidenote: use of the car horn is rampant. But it's used properly each time. As a warning to drivers you are approaching from behind and to signal impending danger.

We made it. Safe. With our luggage. And we were delivered right to the front door of our guesthouse. We paid the man $20, thanked him, and wished him well.

Strangers aren't so bad after all. What do you think?

Kampot is a town with a reach beyond its borders.  Two of the most basic ingredients in cooking are salt and pepper. In a single day, we were able to see the origin of both here in Kampot. First, pepper.

And when I say pepper, I don't mean bell; I mean peppercorns. I'm talking about the spice in your mills at your dining room table. But wait, peppercorns come in different colors you say. Yes! They do. But did you know that black, white, green, and red peppercorns come from the same plant? Peppercorns grown on a vine about 12-13ft tall. 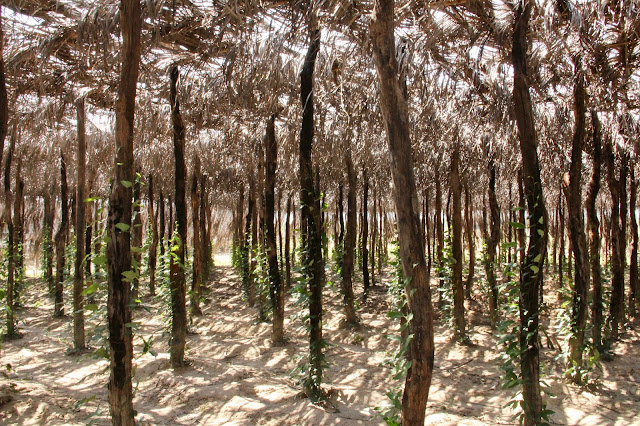 The natural color of peppercorns is green. These are the fresh peppers. Cambodian cuisine uses the fresh green pepper in some of their cooking, the full peppercorn. It is slightly spicy and a bit tangy (to me) when you bite into it.

Red peppercorns are vine ripe peppers. This is a natural color. The processing involves boiling them, followed by sun drying. This gives it the more dark red or reddish brown coloring. 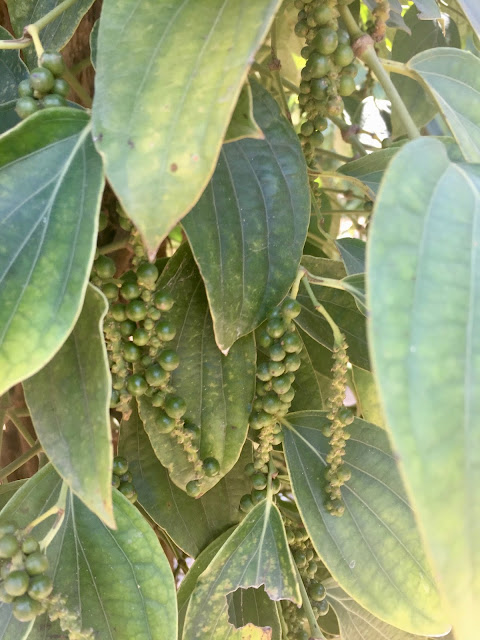 That's the generic idea. I'm sure there's more to it, obviously. But isn't it interesting that it's all one plant? And all the work from start to finish is manual labor. We learned this from our free tour at La Plantation.

Now salt, another labor intensive process, once nature does it's work. What do I mean? First, ocean/sea water is let into pools. Once filled, these pools are closed off and allowed to evaporate under the heat of the sun. This leaves salt crystals in the pools, which are raked into piles each and every afternoon. The piles are then carried by woven basket into a storage warehouse alongside the pools and in a later process (which obviously we did not see) are shipped out to be cleaned, iodized, packaged, and shipped. Apparently salt is what Kampot is more well known for. Where is your salt from? 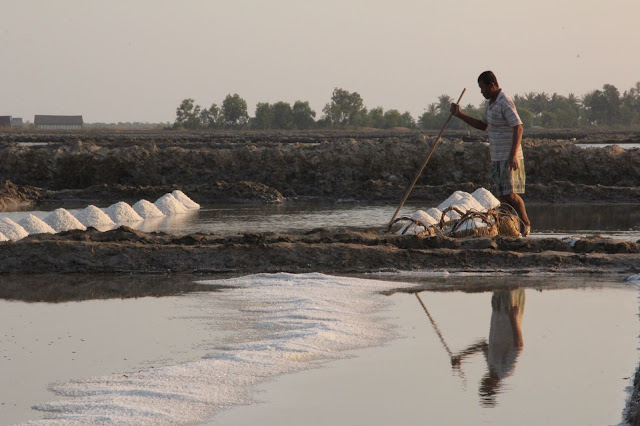 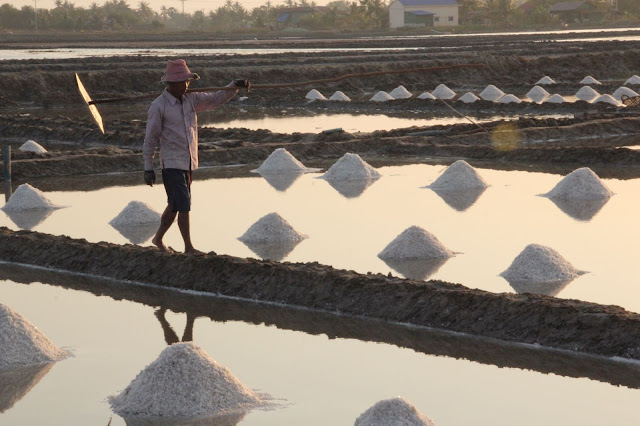 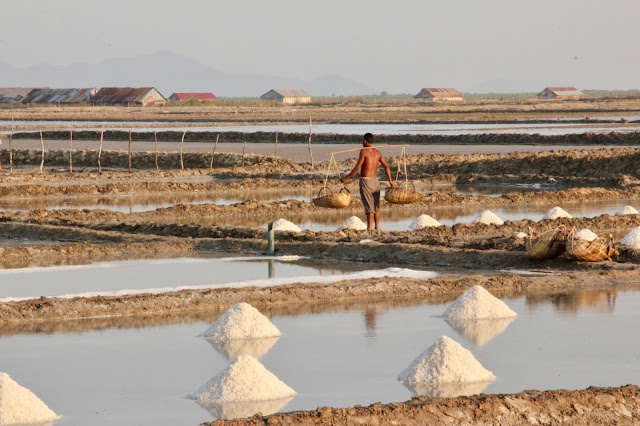 Great experience all wrapped up in a single day of motorbiking around Kampot. I'm impressed by the laborers and the process of it all. I'm so happy to have been able to witness the origins of 2 of the most basic ingredients used in our every day lives. 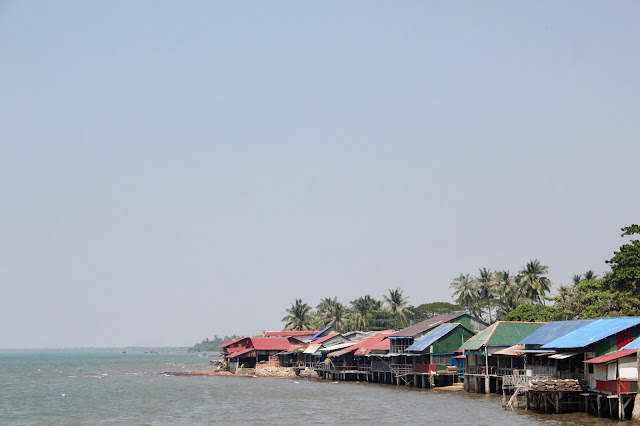 It was a day trip for us. We hopped on our motorbike and zipped down to the town of Kep, a seaside town well known for their crab market. It looks so easy, but we know it's hard work to fish for crab. We heard that there has been overfishing of these crustaceans and find it sad that one day this little town will lose a huge part of their livelihood. 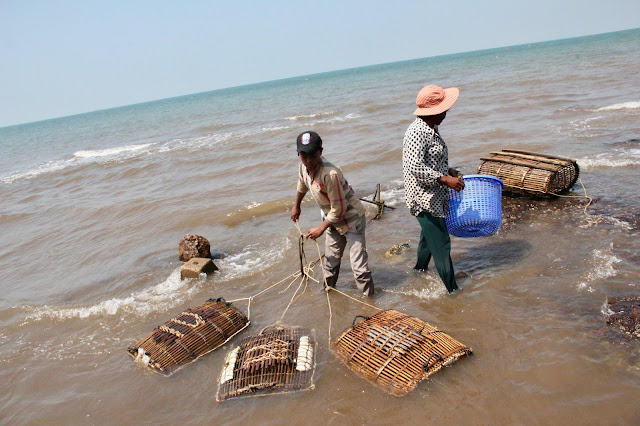 If you know us, it's safe to assume that we tasted the famous crabs. They were delicious, sweet, and so easy to shell. Don't be mistaken by their size. Although they look small, these crabs pack a good amount of meat. 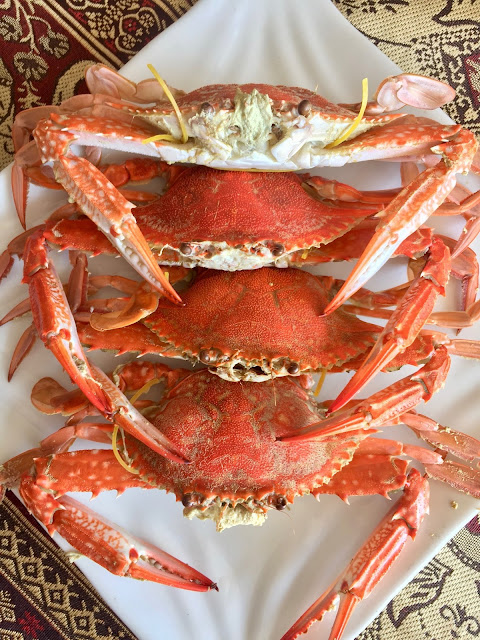