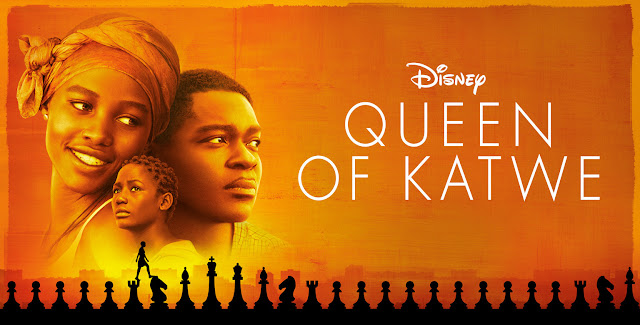 The other day, we were searching for a movie to watch on Netflix. We tend to peruse the Drama section. And in going through all the pictures, we came across an unusual title for a Disney movie - Queen of Katwe. I say unusual because when I think Disney, I think of animated films and not documentaries.

We were drawn to this movie because of 2 words that stood out to us in the description. "Chess" and "Uganda" were those 2 words.

Having been to Uganda and seen the city of Kampala, where this story takes place, was the first draw. Then knowing it was about a game that I used to play constantly when I was a kid was the second reason to press "play." Finding out later that the Academy Award winner Lupita Nyong'o played a role in this movie was just an added bonus.

This drama based on a true story about Phiona Mutesi, a child of the slums of Kampala and eventual chess champion (played by Madina Nalwanga), was inspiring and truly encapsulated a quote referred to by Robert Katende, played by David Oyelowo that:


"The size of your dreams must always exceed your current capacity to achieve them."

Given all the obstacles that Phiona had to overcome, her achievements are outstanding and should serve as an example to everyone that the challenges in life are a necessary struggle that will propel you to success if you are not "quick to tip your King."

The movie is also quite a tribute to the efforts and triumphs of Katende, who uses sports and chess as tools to mentor and encourage vulnerable children living on streets and in the slums of Uganda. Robert's true success is listening to his heart and devoting his life's education to improve the lives of others who come from a similar background.

The Queen of Katwe needs to be on your movie playlist, if not already.
Email ThisBlogThis!Share to TwitterShare to FacebookShare to Pinterest
Labels: Champion, Chess, Education, Life, Movies, Sports