Of all our years of traveling, we'd never been stranded anywhere. We've always been diligent to make arrangements for travel. But for some strange reason, it finally happened... 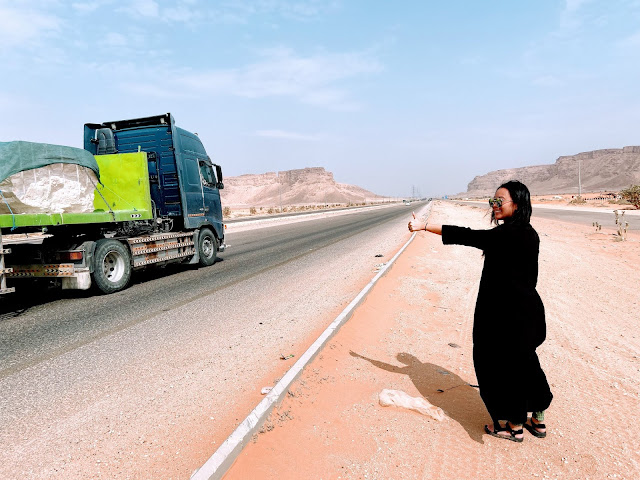 We had to hitchhike home. We were stranded in the desert about one-hour Southwest of Riyadh because our hotel doorman did not send a car to pick us up from the red sand dunes. It was an arrangement that didn't feel right before we left the hotel in the morning. There was definitely some kind of language barrier, but I thought we were able to communicate enough for both sides to understand what had to happen.

We were going to take a taxi out to the Red Sand Dunes to ride ATVs for a couple of hours and the hotel was going to send another taxi 2 hours later so that it would arrive an hour after that to pick us up to go home. We left the geographical coordinates with the doorman who would make the arrangement for us when the time was right.

When you get out to this area, there are a number of operators making offers for you to rent from them. They look nomadic in the sense that they are just working out of a tent or makeshift hut on the roadside. But they have dozens of ATVs available for use.  We had to haggle for the cost of the ATVs and a guide. And we ended up renting a pair of ATVs for less than $15 (including a guide). 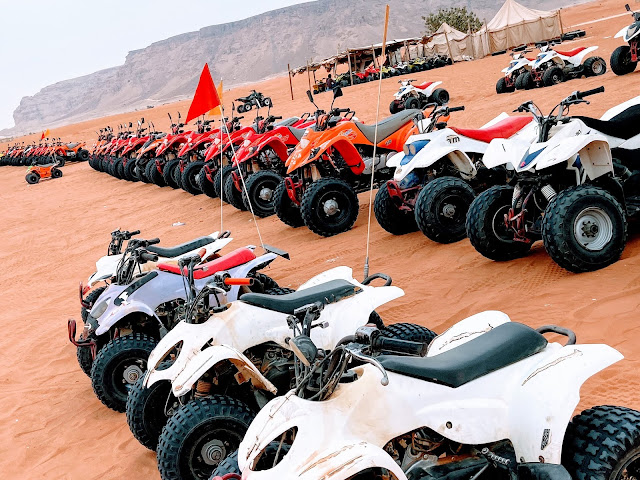 For the next 2 hours, we had a great time riding the red sand dunes in the middle of no where. We followed our guide up and down the dunes, often getting stuck and having to get pulled out. It turns our, the heavier you are, the easier it is to get stuck. Of course, I learned the hard way. But altogether it was a lot of fun to just let it rip on a stretch of sand, kicking up a mini sandstorm in your wake. 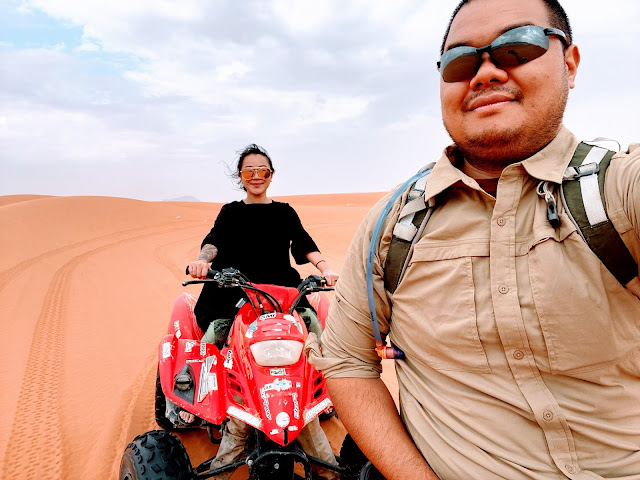 As it goes, all good things must come to an end. And, in our case, anxiety sets in. Ready to leave, we set ourselves on the road-side waiting for a taxi to pull up and look for us. We wait...

But no one shows up. After an hour of waiting in the desert sun, we're starting to get baked and hungry. And I'm starting to panic. We decide that it's best to try to get some help from our new friends Mohammad and his uncle. They are the Sudanese ATV operators whom we rented from. Mohammad has been here in KSA for 4 years. His uncle has been here for 7 years. Mohammad is not married but can only marry a Sudanese. He learned English in school but he was unable to complete his studies for some reason or other. He has 3 sisters, and all are married but back in Sudan. His uncle on the other hand, could not speak English with us and seemed a bit more stoic. Mohammad served as our translator. And we got some bits of information from him as well. We shared some apples with them that we had brought for the excursion. And they were happy to help us. Not because of the apples, but because they are genuinely nice people. 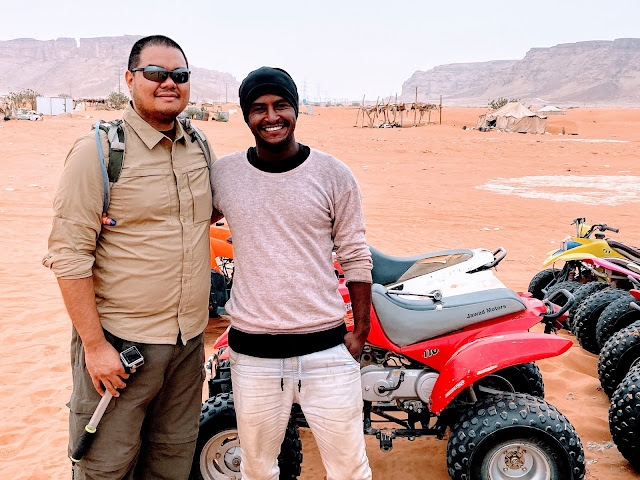 Surprisingly, 3 cars stopped to try to help us. And Mohammad served as our translator with those passersby. The first 2 were headed in different directions and so could not afford to help us get back. A 3rd car stopped, a Ford Explorer. As American as the car was, the driver could not speak a word of English. But Mohammad was able to organize this man to drive us to a town where he lives closer to Riyadh. Here, he would organize a taxi to take us on to Riyadh.

After giving thanks to Mohammad for his assistance, we decided that this was going to be our best chance at getting back to our hotel. So we had to take it or else suffer from heat and the possibility of being stranded for much longer in the desert. We got in. I sat in the front.

There's a natural skepticism that comes over you when you get into a stranger's car. You are apprehensive. You are defensive. Your eyes and ear are peeled. Your vision is widened and you look for any strange signs of trouble. At first, this man was quiet. But I think our appearance really intrigued him. He could not help himself but try to use sign language to try to communicate. 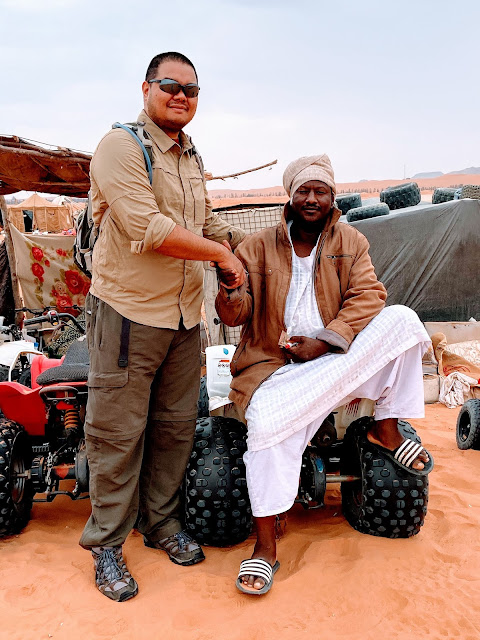 Quick to try to understand him, I pulled out my cell phone with Google Translate. Being always prepared for this type of situation, I had the Arabic language downloaded. I typed something in English, and he was happily surprised to read it in Arabic! He was shocked to say the least. But he had an iPhone and he wanted to have the same app. So he downloaded it on the spot. On his phone, he typed in Arabic and it spit out English. On my phone, I typed in English, and it spit out Arabic. (I couldn't let him type on my phone because even though I downloaded the Arabic language to my phone, I failed to download the Arabic keyboard. Oops. Lesson learned.)

For the next 45+ minutes, until we reached his town, we communicated this way. Yea, I know what you're thinking. How could he type out a whole conversation while driving? It's ok, erratic driving is pretty normal in KSA. It's dangerous and causes a lot of accidents, but it's very normal. Consider yourself warned. Haha.

We learned about his family, his children, his work, his education. We shared our story about why we were in KSA. He, like many others we told, was very happy to know that we were tourists. He was shocked, but happy. He asked how we liked his country. And he was thrilled that we enjoyed our time here so far. We told him all of the places we were going to visit, and he was impressed. The time passed very quickly.

When we arrived in his town, he pulled over to the side of the road and he arranged for a taxi to drive us to Riyadh, another 30 minutes away. We offered to give him money but he declined. It seemed that he was happy to do this. We later learned that service to others is a key tenet of Islam. I think the taxi driver was trying to charge us an unreasonable amount, but this man worked it down to something fair. And just like that, we were off - headed home finally.

What's crazy is that I cannot remember or we never got this man's name. We've often found in our travels that we've connected with so many people in many ways and had long detailed conversations only to realize that at the end that we didn't get those peoples' names until the end. I have to imagine that we introduced ourselves just before we parted ways but maybe I forgot to write it down like I normally do.