A Conversation at the Top of the Kingdom Centre 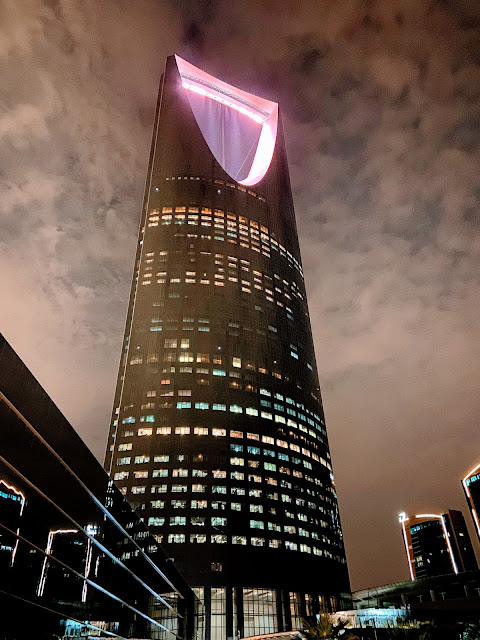 The Kingdom Centre Tower is a 99-story skyscraper in Riyadh, Saudi Arabia. It is the 5th tallest skyscraper in the country. More notably, it is the world's third-tallest building with a hole (yes, that void at the top that makes it look like a bottle opener) after the Shanghai World Financial Center and the 85 Sky Tower in Taiwan.

The building would be shaped much like a giant taser if not for the connecting feature called the Sky Bridge at the top. The bridge itself is not straight across as one would imagine, but it's more of a parabolic arch that allows 360-degree views from the center of Riyadh.


It was here, after a strange and unsuccessful attempt to see Ad Diriyah (it was being prepared for a Riyadh Season event), that we encountered an Asian Australian doctor (Dr. Danny) and his colleague and local guide, Dr. Assem Kalantan. Typically, bumping into other tourists in any other tourist spot on the planet would be no big deal. But since KSA had recently opened it's doors to tourism, this was very much like a welcome site.

When they heard us speaking English to each other, it was hard for them not to stop us to inquire. Dr. Danny didn't seem as interested as they were in Riyadh for a medical conference. But Dr. Assem was yet another local thrilled to see the prospects of tourism. We engaged in conversation for an easy 30 minutes at least at the center of the Sky Bridge atop the Kingdom Centre.

Like other inquisitive Saudis we met along the way, Dr. Assem asked us many of the same questions. How long you like it? Where have you been? Where are you going? And like everyone else, the surprise on his face for all the answers we provided couldn't be more genuine. It's as if the kingdom's people couldn't fathom the idea of citizens of the world having so much interest in their country and culture. But we assured him that everything was of interest to us. We were visiting cultural and historical sites. We were traveling to major cities and local villages alike. We were venturing off to hard to reach locales. In a word, he was impressed. And that made us happy. It's not our goal to impress anyone, but our happiness came from his happiness with hearing our interests in his world.

We talked about how Riyadh was growing and developing, as evidenced by the photo above and the prospect of a metro system being developed. You can clearly see how much land there is and how much potential the city has to grow. From mud brick structures to skyscrapers like the Kingdom Centre, Riyadh has the gamut of development for the naked eye to behold. 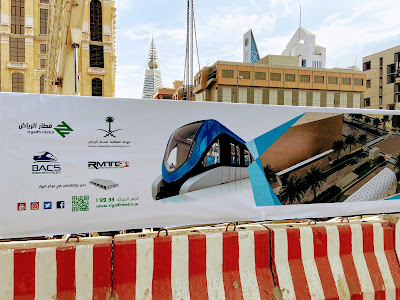 You see that skyline in the distance in the above photo? That's the King Abdullah Financial District, akin to New York City's Financial District. Although long overdue for completion, it's proof that development continues.

In the near future, one hopes, there will be a metro that will connect most of King Fahd Rd. That would be great because walking around Riyadh is not easy. There aren't sidewalks and the distances between some of these places aren't short. Despite that, we still walked to as many places as we could. And we did as the locals would do. That is, just cross the street at random and hope not to be hit by any oncoming traffic. That's partly in jest. In reality, I think the drivers (despite their reputation for not being so good) are fairly good at being careful around pedestrians.

Dr. Assem seemed very concerned that we enjoy our stay and was relieved when we confirmed our enjoyment. We even got to talking about food. And of course, there's no way that talking about food, let alone eating it, doesn't spark joy for anyone. 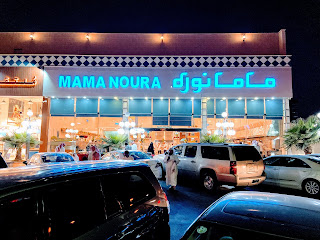 For our last night in Riyadh, we asked him for a suggestion. It was clear that he was torn between offering us something fancy or something traditional and local. We assured him that traditional and local was the way to go, and that broadened the smile on his face. To see that we were so easy-going and able to eat what they eat made his suggestion a no-brainer.

Mama Noura is the place to go!

You never know who you are going to meet along the way. You could be anywhere in the world. The situation could be dire or upbeat, anxious or easy-going. But communication is what helps us all survive, cope, ask for help, become enlightened, teach, and be taught. Ride the two-way street equally!