Riyadh Season - a huge city wide series of events. The “Saudi Seasons” program represents a new initiative launched by the Saudi Commission of Tourism and Heritage (SCTH) in 2019 and includes 11 seasons across various regions of the Kingdom. Riyadh Season is 1 of 11 "seasons" around Saudi Arabia. Winter Wonderland and Riyadh Boulevard are 2 events we attended during the "season." Strangely, as foreigners, we were one of the first people to attend this event in all of it's history because it just started!

Riyadh Boulevard = a combination of restaurant week and food truck park in the sense that all the participating restaurants are given temporary dining areas in a giant space next to each other. Like having a full blown restaurant inside a stadium.

Winter Wonderland was like a winter theme park. It was adapted from the UK events and similar events around the world. This event, spanning weeks, has boardwalk games and roller coasters and food parks, live performances (in English and Arabic) and other cool events. It's like going to Disney or Six Flags. 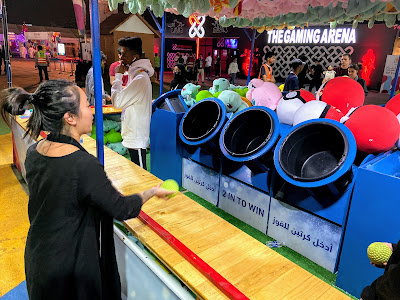 Each event was heavily attended, which was awesome to see. Although sometimes it didn't seem that way because of how big the area was that hosted each event. People could be spread throughout the "park." Men, women, children - mostly locals it seemed - were all enjoying a night out in the cooler air, taking in the amazing sights setup for the season, and partaking in the food, games, and music. These events went well into the late night hours. I'm pretty sure one night we didn't get back to our hotel until 1AM at least. No one looked at us strangely. In fact, again, we felt welcomed. We were smiled at. Some tried to talk to us to test their English. We answered with a shukraan - thank you in our terrible Western-sounding Arabic. We were given an extra turn at the ball toss game.

One thing that was very evident was how new the event was to people. Everyone around us had the look of awe, amazement, and wonder of how this was going to work. But we all managed together. We navigated the parks, stalls, entertainment, eating venues, and all the seasons had to offer. 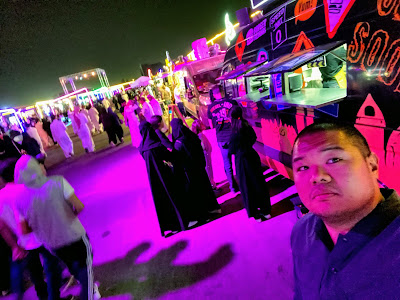 What was also evident was, in the background of it all, how much development the city was undergoing. In the picture below, you will see a dark silhouette of what will become the new Riyadh skyline. In the years to come, the darkness that looks like Gotham City, will become one similar to Manhattan's downtown / Wall Street area. And the rise of every structure is coming at unimaginable speed. There are cranes everywhere. If you look closely, you'll be able tosee a few. I remember thinking to myself that the Riyadh we know today will not be the Riyadh we see in a few short years.


We were very lucky to get tickets to these events. Our friend and her employer were kind enough to think of our visit and purchased our entrance in advance. Overall, it was a really a fantastic insight to the social aspect of Saudi culture. For sure it wasn't always like this. It's become more Westernized I imagine.

And, like all things in life, there are good and bad sides to adopting something that is different from traditional culture. It's good to see Saudis open up to other cultures. And it's even better that foreigners see, feel, experience, and appreciate the Saudis.