A Book For Anyone And EVERYONE - It's A MUST Read

I sometimes check reading lists of notable people to get an idea of what's popular, dramatic, inspirational, action-packed, or insightful. Over the years, I've not been able to read as much as I like, but as per my recent post on self-improvement, the past 3 months given me some time to catch up. For those of you who follow me on Twitter you'll know that I most recently read The Alchemist by Paulo Coelho. His book was high atop many readers lists. Successful people have all read this book, and it's no wonder why.

It is the story of a boy, Santiago, who travels to pursue his dreams. Along the way, he learns to trust his heart and heed the calls of opportunity. He overcomes fear and chases the potential treasures unknown to him except by his sheer curiosity. Through hardships, bad and good experience, and the insightful people who meets and speaks with along the way, the boy is successful in the end.

This tale lends itself to the life story of anyone who has a goal, who has a dream, who wants to succeed. This fictional work has the power to make you see and understand the importance of drive, determination, and the idea that dreams do come true. Like all the great minds who have previously read this novel, I also must list it above many of the books, both fiction and non-fiction that I've read over the course of time.

What captured me the most throughout the book was how quotable the writing was. Many things just hit me, almost as if I'd never thought of them myself. But the reality is that I've thought of some of these things but the story brought these ideas back to the forefront of my thoughts. Here are some excerpts from the book that left their mark on my mind:

"That is what made traveling appeal to him - he always made new friends, and he didn't need to spend all of his time with them. When someone sees the same people every day, as had happened with him at the seminary, they wind up becoming part of that person's life. And then they want the person to change. If someone isn't what others want them to be, the others become angry. Everyone seems to have a clear idea of how other people should lead their lives, but none about his or her own. " - Santiago's thoughts - The Alchemist


" 'It's not what enters men's mouths that's evil', said the alchemist. 'It's what comes out of their mouths that is.' " - The Alchemist


" 'Everyone on earth has a treasure that awaits him,' his heart said. 'We, people's hearts, seldom say much about those treasures, because people no longer want to go in search of them. We speak of them only to children. Later we simply let life proceed, in its own direction, toward its own fate. But unfortunately, very few follow the path laid out for them - the path to their Personal Legends, and to happiness. Most people see the world as a threatening place, and, because they do, the world turns out, indeed, to be a threatening place.' " - Santiago's heart - The Alchemist


" 'Every search begins with beginner's luck. And every search ends with the victor's being severely tested.' " - The Alchemist


" 'If a person is living out his Personal Legend, he knows everything he needs to know. There is only one thing that makes a dream impossible to achieve: the fear of failure.' "- The Alchemist 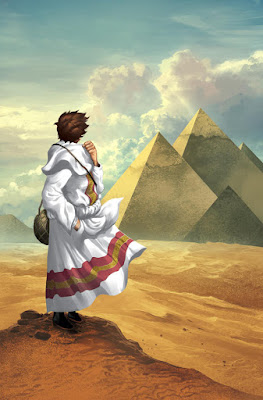 Do these quotes evoke the same feelings or thoughts for anyone else? Is it strangely odd how spot-on and relatable these excerpts are to our lives?

As I go through some of my more present struggles, I'm sure I'll keep the story of Santiago close to heart and in mind as I navigate the journeys that life presents.
Email ThisBlogThis!Share to TwitterShare to FacebookShare to Pinterest
Labels: Books, Dreams, Education, Life, Reading, Success