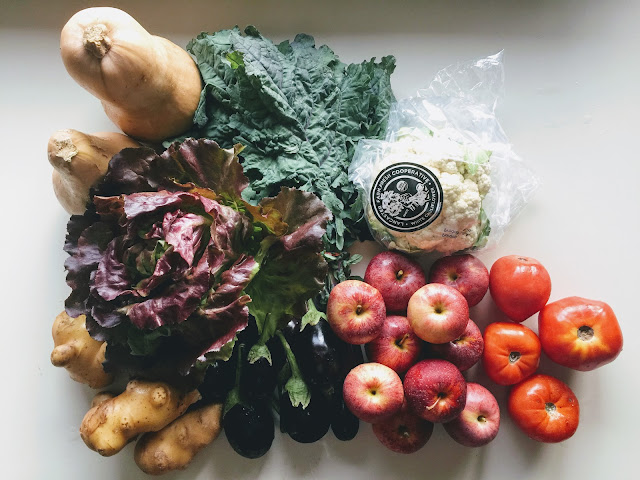 We're starting to get into the Fall vegetables as this is the 2nd box that has given us a gourd. In this case, butternut squash. This should be another interesting week of figuring out how to cook or make use of each of these items. I think the ingredients I'm most unfamiliar with here are the kale and cauliflower. I may try some kale chips and maybe I'll rice the cauliflower. Yea, I used "rice" as a verb here. I figured if Green Giant coined the term then I should use it as such.


From the last box, I tried my hand at making a few things that I imagined I'd like.

The first was a concoction with the cabbage. It wasn't the star of the dish, but it brought some texture and color to overall presentation. This is my garlic and onion chili chicken with cabbage. It was delicious. I generally use ground chicken because it's cheaper than beef and also more healthy. It's my protein of choice. I even use ground chicken in my pasta sauce and meatballs. Do you think you'd like it? 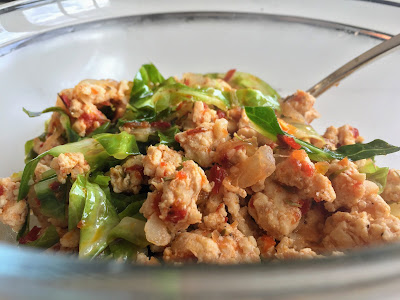 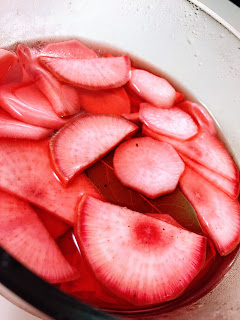 Next, I pickled the winter radishes in a mixture of sugar, vinegar, and bay leaf. After boiling the mixture, I ladled it over the sliced radishes, let it cool, and then refrigerated it. I have to say that I'm really not a fan of this root vegetable in general. However, the Korean restaurants who make it, in whatever way they do it, I love it. Whenever I get the banchan, with my meal, I ask for more pickled radishes, cucumbers, and kimchi. Maybe mine needed to be less sweet and more sour.

I've never pickled anything before, so maybe it was just a noob mistake or maybe I just picked the wrong recipe for my tastebuds. Whatever the case, these pickled radishes are still sitting in my fridge waiting for someone to eat them.

At least the color is nice!

Lastly, but most notably was my attempt at making the purple sweet potato pie whose recipe was included in the newsletter that we get from Boxed Organics with every box. I'd have to say this was challenging because although the recipe calls for this to be raw, I had to boil my purple potatoes for ease of use. What do I mean? 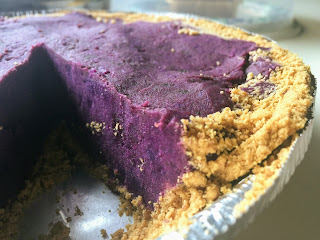 I don't have a food processor. So I had to mash these potatoes by hand with nothing but a regular sized fork. In order to make it easier, I boiled the spuds to make them softer, also allowing me to peel them easier. And it was still difficult to mash. Maybe I should have let it boil longer. But I cheated in another way I suppose; I traded the difficulty of mashing for the convenience of a pre-made pie crust. Nonetheless, the end result was fantastic. It was a hit in my household. Everyone seemed to enjoy it. And it's good at any time of day, for breakfast, an afternoon snack, or even dessert after dinner. For me, I took my slice for breakfast along with a nice warm cup of coffee. 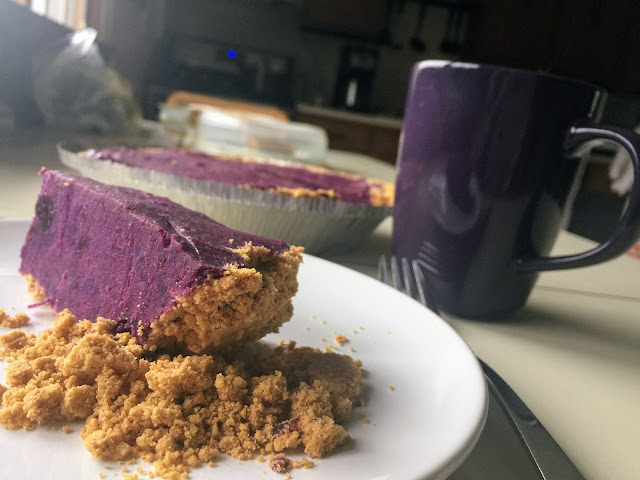 I'm having fun so far with the variety of vegetables we're getting through the CSA program. It's a great way to diversify the diet and keeps meals interesting and creative. I'm looking forward to "playing" with my food again this week. I'll let you know how it goes.