I recently learned that someone we are friends with is a Supertaster. Quite obviously from the title alone we know that Supertasters have a far more sensitive tastebuds than the average person and can taste things that others cannot. That's because they have twice the number of tastebuds as the next person. Strangely, though, the most commonly heightened flavors are on the bitter side.

In talking to our friend (let's call him Chris), he gave us the example of eating lettuce. To most people, lettuce doesn't have any real flavor. It adds mostly a texture and moisture component to food (besides salads). However, he seemed to describe some sort of bitterness or maybe an earthiness that wasn't so pleasing to his tastebuds.

Chris went on to say that most green vegetables are bitter and less palatable to Supertasters than anything else. Not all tastebuds are the same in finding the same foods less appetizing than others either.  And also, not all greens are bitter. If I recall correctly, he was ok eating spinach (was it cooked or raw? I can't recall). Even water has distinct flavors. I bet they can differentiate between all the branded bottles of water.

Other things that Supertasters will possibly pass on are alcohol, chocolate, coffee, sugary and fatty foods. Hence people with this super ability are typically more fit, like Chris. And on a bright note, despite not enjoying the same foods most people do and being a bit more picky in the foods they choose to consume, Supertasters have less chance of developing cardiovascular diseases.

I find it super interesting that there are people out there that have this ability. It makes me wonder if, despite not liking the flavors, they could positively identify certain flavors? That could make going out to dinner with these people even more fun. I asked Chris if this super power was more of a gift or a curse, and he seemed to think curse. I suppose it's limiting and makes it somewhat difficult to find food that you enjoy. That would make it hard to be a foodie like me. But at least they know what they like and avoid what they don't like. If only Supertasters knew this information as children, it probably would have saved plenty of arguments with their parents.

Wouldn't it be cool if there were Supertasters whose tongue somehow enhanced umami, salty, or sweet rather than highlight the bitter? 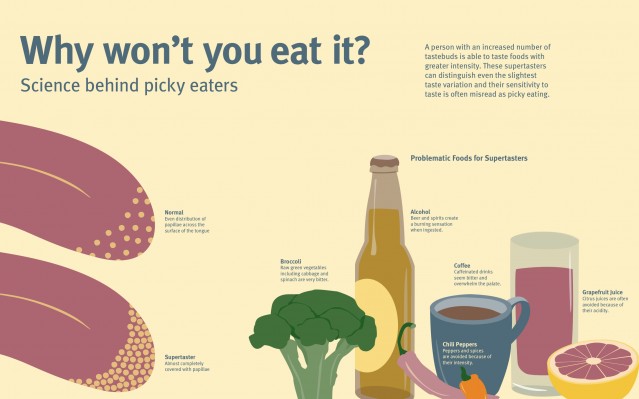