This post comes as I read yet another headline about a climate change denier entering political office, again. To me, it's like the antithesis of Neil Armstrong's profound words as he stepped on the moon for the first time in all of history.


"That's one small step for man, one giant leap for mankind." - Neil Armstrong

Rather, I'd say that the current state of political affairs makes me believe that we have taken smalls steps in the right direction, but one giant leap backwards in terms of our environmental concern.

98% (192 of 195 parties to the Paris Agreement) of the civilized world agree that climate change is real and have taken and continue to take steps towards curbing the effects of global warming. How is it that the vast majority of Earth's population can accept the facts of climate change and strive to implement change, but one the most powerful countries in every sense refuses to believe scientific fact? Check that. How is it that one of the most powerful countries can allow a handful of deniers to steer the course of action on the greatest threat to human life we will ever experience?

Who will take responsibility for the damage and destruction as a result of the inaction, or more accurately the reversal of scheduled action to combat the rise of greenhouse gas levels in the atmosphere? By the time the world feels the most intense climate results of mother nature, these politicians, appointees, and even the President himself will be out of office. And then what? Blame them still? What does that accomplish? 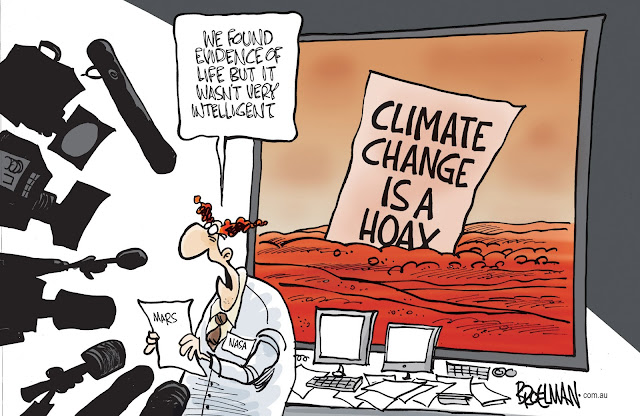 Yes, we're feeling the effects now but it only gets worse in the future. And the fact is that although the rest of the world will contribute to the solution, the United States is the biggest polluter in the world and any offset will not be enough to neutralize the negative effects this country puts out.

It is, however, inspiring and overwhelmingly positive that individuals, businesses, and cities will continue to support the Paris Agreement despite the reverse route taken by the current administration. But still, get these naysayers out of office! They're ruining our lives, literally. (364)
Email ThisBlogThis!Share to TwitterShare to FacebookShare to Pinterest
Labels: Climate Change, Global Warming, Life, Politics