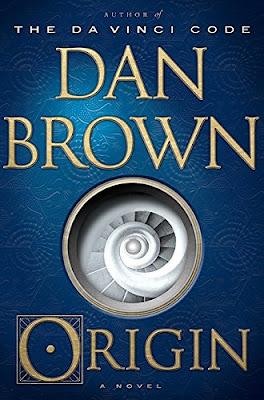 On Thursday, I received a book that I had pre-ordered through Amazon by an author whom I follow. I've read all of his books, and have been entertained by all of them (except maybe Digital Fortress and Deception Point). That author is none other than the wildly popular Dan Brown. His most famous book was The Da Vinci Code - a thrilling murder mystery that pokes at the questions of religion, the mysticism of the fabled Holy Grail, secret societies, and other Western legends. The book's popularity skyrocketed with the criticisms it received regarding what the Catholic Church viewed as speculation and misrepresentation of core ideas of Christianity. The book was even banned by the Catholic Church and a handful of predominantly Christian countries.

The main characters' use of symbology and cryptology to unlock the meanings of the clues left for them add to the dramatics and makes one consider the complexities of religion and history. To me, the book is a historical fiction based on plenty of research of real events / places / beliefs / religions. It was certainly a page turner.

Origin, Brown's newest release,  is in many ways similar to his other works. It is yet another Robert Langdon (the main character) thriller. A professor of symbology and religious iconology, Langdon weaves his way through the possible meanings of various scientific enigmas and modern and classical art, not to mention their ties to religion to help unlock supposed answers to two fundamental questions about human existence. Yet despite the thought that this could be another historical fiction, the plot manages to take us into the future and ties in the historical significance of events, science, and art to the world of supercomputing and artificial intelligence. Again, I have to imagine that copious amounts of research had to be done to accurately use real life people, events, places, ideas, works of art, and scientific theory throughout the story.

Dan Brown's ability to stitch together various aspects of life's greatest questions about life, religion, science, technology, and the human mind makes reading his work truly worth it. Like most of his other books, I wasn't able to put this one down until I got through it. (368)
Email ThisBlogThis!Share to TwitterShare to FacebookShare to Pinterest
Labels: Amazon, Books, Dan Brown, Reading, Reading is Fundamental